A literary recommendation: this substantial essay by writer Ellis Avery, The Sapphire and the Tooth. It’s a short, heart-opening read about difficult family, survival, and selling jewelry in the Diamond District of New York City. Many of you will also love her novel The Last Nude, set in the jaded milieu of 1920s Paris, packed with lush dressmaking, transgressive romance, and the paintings of Tamara de Lempicka.

Two sites to sell your jewelry, or find a gemological bargain: Loupe Troop and Diamond Bistro. Both of these sites are linked to large jewelry discussion boards, so the quality and vendor reliability is far higher than eBay.

What is the future of blogging? Especially for blogs in the feminine sphere? Short version: to make money, grab your camera and hit Instagram: to express yourself, relax and do what you like.

Winter is burlesque season! Bundle up in your retro finest and come out to the cabaret. I’ve got a busy burlesque schedule as an emcee – do come out to Caburlesque: A Trip Through Time for a classic show and to DIY BurlesKiwi in June, a hilarious competition that focuses on burlesque creativity on a budget.

When it’s the holidays – i.e., time to spend your money on other people – it’s nice to get something for yourself. And it’s even nicer when it’s free, like these e-books!

Occasionally I stop by Smart Bitches, Trashy Books to see what the Smart Bitches are saying about romance novels, the state of book publishing, and whatever else they care to talk about – if they want to write about it, I’ll probably be amused. A Smart Bitch came Down Under and did a post on The Price of Books in Australia. The first statement in the first comment: “The prices seem insanely high…” This is especially sad around the holidays, when we love to give and receive books, and when we actually have some time to read ourselves. So: some free books that I enjoyed. Load up your e-reader before you head for the holiday hills.

Frances Hodgson Burnett – Best known for her children’s books, she also wrote for Victorian adults, and two of the most amusing examples of Victorian scenery-chewing are The Shuttle and Making of a Marchioness. The Shuttle is the kind of Victorian novel that gave Victorian novels a bad name back in the day. Depressing Gothic houses, simmering sexual tension, Yanks versus Brits, an idealized Gibson Girl heroine, and a cast of variably comic supporting characters (misplaced typewriter salesman G. Selden is my favorite). All this and a child character named…wait for it…Ugthred.

In a different vein, Making of a Marchioness is a well-loved Cinderella story, under the guise of one of those good-idea-marriage romance novels. Burnett can’t resist bringing the gothic back in the second half. Readable in a similar vein to the best of Georgette Heyer.

Lady Audley’s Secret – “Braddon’s “sensation” novel tells the story of Lucy Graham, a poor governess of unknown circumstances who wins the heart of the rich Sir Audley. When Sir Audley’s nephew Robert comes to visit with his friend George, George goes missing, and the book quickly turns into an action-packed detective story, Victorian style.” This summary leaves out the fevered gender wierdness throughout. Worth it for the female supremacist afternoon tea scene alone! Read and analyze with a friend for maximum fun. Well, maximum fun if you were an English major who liked women’s studies.

Vanity Fair – I am occasionally asked if I’m an Austen fan. The answer is no – I found Pride and Prejudice and Zombies a huge improvement over the original – but I am a tremendous Thackeray fan. If you enjoyed Austen, or you didn’t find Austen acerbic enough, you’ll enjoy this snappier volume, with its famous anti-heroine and ample socioeconomic satire threaded through the storyline, such as the famous “How To Live on Nothing A Year.”

White Shadows in the South Seas – This ripping adventure yarn is good if you’re interested in Pacific history, tattoos, or colonialism. Be advised: this starts out with standard early 1910s racism and moves to criticize the damage done by colonialism.Â  That said, it’s a page-turner that takes you to the Marquesas, a thousand kilometers from Tahiti, barely in time to experience the shreds of traditional culture while a flotsam of Western expats invents tiki cocktails, tries to make money, and, sometimes, learns what has been lost. Wildly popular and influential in the 1920s, several film versions were made.

This catalog at Girl Ebooks contains more treasures to download and read for free. The Hawaiian Archipelago and Roast Beef, Medium: The Business Adventures of Emma McChesney have already caught my eye.

For a book that is worth paying money for, and that makes a good gift between women friends, I recently recommended Belle de Jour’s Guide to Men to a friend.Â  Belle de Jour came to fame as an intelligent, witty sex-worker blogger, with her posts becoming several books and a television show. Today she has moved on, focusing on her work as a children’s health researcher and writing for The Telegraph.

Her “Guide to Men” is pitched at heterosexual women seeking to navigate modern love and sex. The British regional man-type guide isn’t much use to those of us outside the UK. And you may, or may not, agree with Belle’s take on gender dynamics and her occasional oversnarkiness. Her advice on dating, dealing with the realities of relationships, embracing singlehood if that’s where you’re at, and styling yourself for maximum tasteful sex appeal cannot be beat. 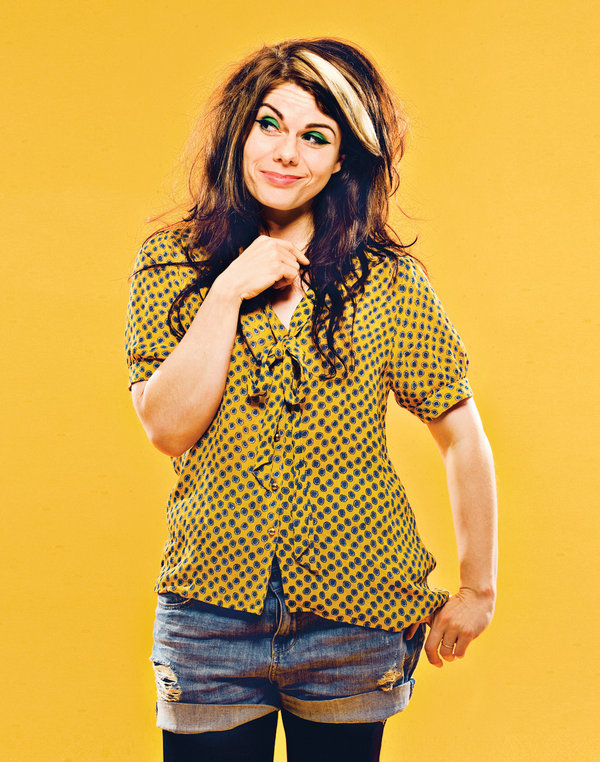 Horrified: In the fashion spotlight: all the clothing we’re not wearing. Ecouterre “U.K. Consumers Own Â£30 Billion Worth of Clothing They Never Wear” article here, and Vixen Vintage on the new bookÂ  Overdressed: The Shockingly High Cost of Cheap Fashion. I had a clothing swap three weeks ago, and when we were done, we took the remaining clothes to the Lower Hutt Women’s Centre, which continues the swap as women and girls take the clothes directly.

Loving: I’m not the only one to notice the stylish women in tech – see this article. Related: fashionista uses chemical heat pack technology to stay warm in designer clothing.

Loving: Thanks to my friend Phoenix Flame I have joined the legions of fans of Caitlin Moran. Phoenix thrust her book, How To Be A Woman, into my hands. She’s a feminist voice for the Twitter age. A romp of an interview with her is here.

Loving: This lady is my blog crush of the week: Grown and Curvy. I love her use of color and proportion, her beautiful grooming. Her enchanting smile captured me and then I read this post of hers and learned what’s behind that smile, and I’m nearly in tears.

Horrified And Loving At The Same Time: Illamasqua is petitioning to reduce inflated cosmetic prices in Australia. Hey, we have to deal with this here in NZ, too. And…why a petition? Why not just reduce the prices? They’re the retailer, yes? END_OF_DOCUMENT_TOKEN_TO_BE_REPLACED

Some randomness, because I can do that: a sweater, “chilly climate” and feminism, and the guy I wish was my gay BFF.

Aussie boutique chain Cue has a just-right dark brown leopard print cardigan right now. On the sale racks, even! It’s one for the petites with its cropped length and 3/4 sleeves. Petite = person under 5’3″ or 160 cms tall. As a shorty – I mean, a “petite” – I find Cue’s clothes fit me reasonably well overall. If you’re taller, Ezibuy has some grey leopard items and this similar sweater (XS only left.)

On a related note, I never believe any compliment that comes from a sales person.Â  Just on general principle…

Most of my workplaces are techy and there’s a high ratio of men to women. Sometimes, as at my current place of employment, it’s fine. At other places, even without overt sexism or harassment, something felt off. Turns out there’s a name for it, the “chilly climate,” and everyone involved can change it.

Authorial enthusiasm this week is for the queer writer Edmund White. His painful honesty – is it humility or humiliation? Something has haunted his eyes in every portrait of him, throughout his life. For an introduction to him, I recommend his autobiographical City Boy, about living and adventuring in NYC in the 70s. Then there’s his excellent, raw My Lives.Â  One of the more easily digestible chapters, My Women, describes the gay-man-as-woman’s-best-friend situation from the gay man’s side.